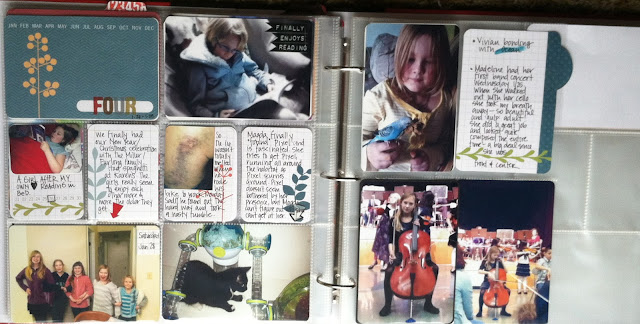 for some reason, i didn't really take too many pictures last week. uh oh, i hope that's not a sign. anyway, many of the pictures i took were vertical - not normal for me, so i had a real hard time laying out my week (i may have one a week or so, and then i usually just put them in horizontally, it's no biggie to me). in the end i mangled cut up a page protector that was all verticals and used it as a mini page. couldn't do as an insert, because i just didn't have the pictures or stuff from the week to make another full size page. it's gonna be funky looking in the book because i am going to have a blank page behind it...see that on the right? i'll probably fill the pockets with paper at some point. 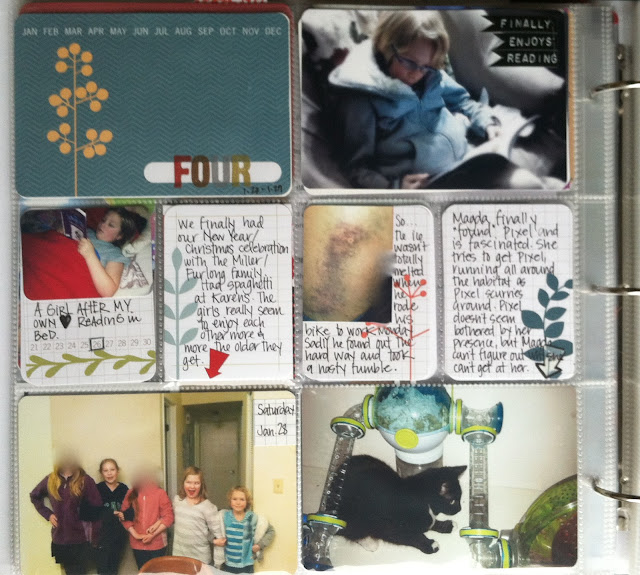 "four" is made from ancient rub ons from me & my big ideas - gonna be lots of ancient stuff used this year, i have, ahem, quite a stash i'm trying to deplete. the reading jot on go-go-gadget girl 2b's picture was made with my vintage (read: old, orange, from the 70's) label maker. family get together - seriously bad pic but oh well. mr. fast-lanes, um, buttock region and the lovely bruise he got  when he hit the ice on his bike! the kitten discovered the hamster - it is hilarious to watch her watch the hamster who seems totally unfazed by the mighty predator. 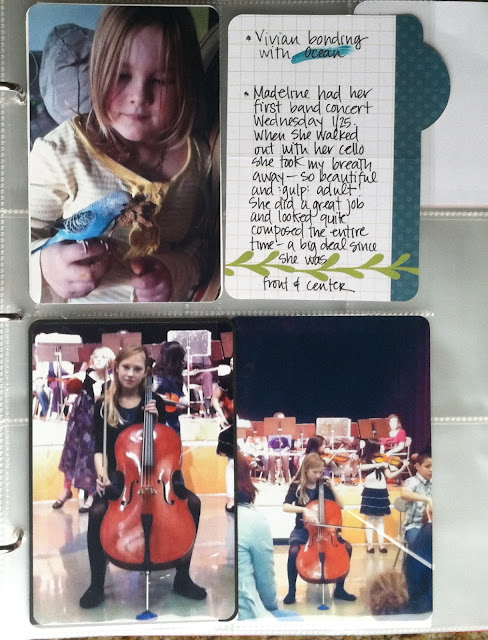 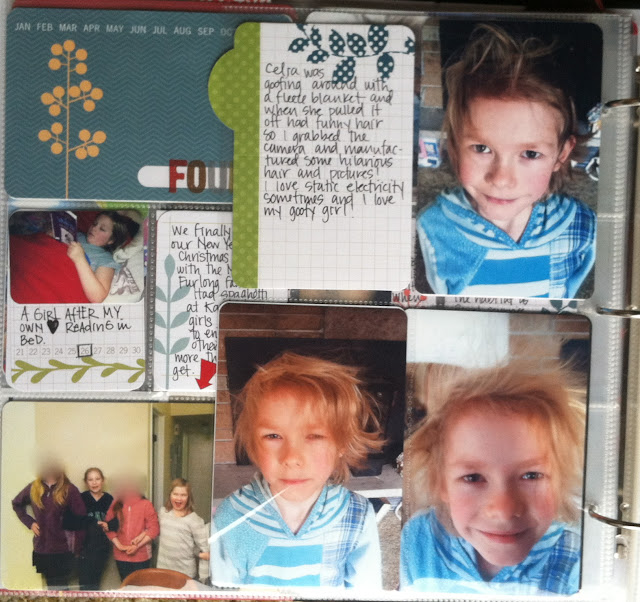 go-go-gadget girl 2b with funny hair thanks to a fleece blanket, static electricity, and mommy!


that's it. while it's not a thrilling week, and i didn't have a lot of pictures or filler, it is fini!

my kids are killing me...oh and project life

i love my go-go-gadget girls, and they really are pretty good, but mornings are just killing me recently. oldest go-go-gadget (10 now) simply will not. get. out. of. bed. i've tried everything to get her up, from waking her up, 15, 30, 60 minutes before the normal time to - i'm ashamed to say - yelling at her. and the playing...the go-go-gadget girls't aren't allowed electronics before school, but how does one stop creative play? i wouldn't mind the play if everything were done. but it's not.  constantly telling them to get dressed, brush your hair, brush your teeth, etc. makes me feel like such a harpy. they all know what needs to be done, but keeping them on task has become part of the routine it seems. i could really use some concrete suggestions if you've got any.

ok. enough whining. on with something nicer. project life. week three is below. i had it done on time, just didn't get around to taking pics in a timely manner! again, a reminder: kit remains, regular scrapper - if you're looking for something fancy, sorry, that's not me, but i could point you to some fantastic ones: elle's studio, just about everything, learn with jenny, nichol magourik, & mish mash for starts. ok, on with the show.

you may notice, it's mainly about snow. snow is a big deal here were we live....we don't get it too often, and when we do, it's not usually a lot. this time, we got a lot. schools were closed (extending our year by 3 days, yuck), and while i am a good snow driver (many years driving to s. dakota in the winter) i really had no place to go to justify the driving. we hunkered down and played for the most part. now that it's over i wish i had included pictures of the indoor stuff like games and baking. oh well, i'll throw those in the junk journal. 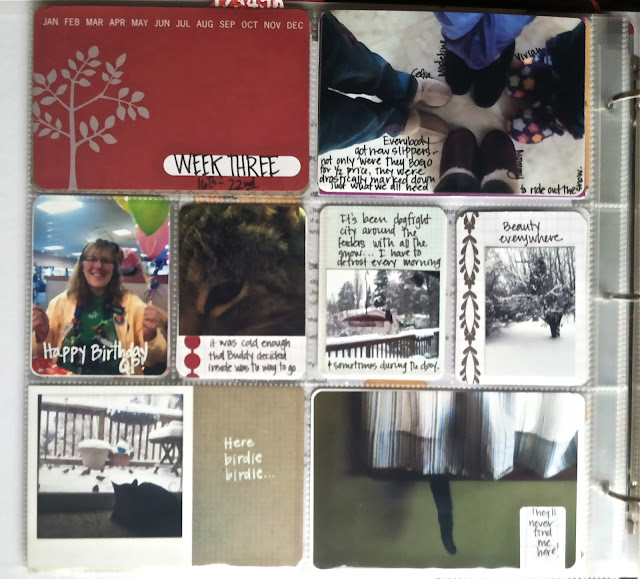 i wrote on monday's picture with a slick writer and the birthday and here birdie birdie pictures with a making memories opaque pen i got on clearance for $2. i had no idea if it would be what i wanted when i bought it, but it is exactly what i wanted....it is replacing my horribly defective sharpie fine white paint marker. lots of animal pictures...my found kitty, buddy, who is very scared and only likes me decided it would be a good time to come in; a brief blurb about the hummingbirds fighting for the feeders; and the kitten. i don't know how many times she ran into that slider trying to get the birds (i put seed out for them) 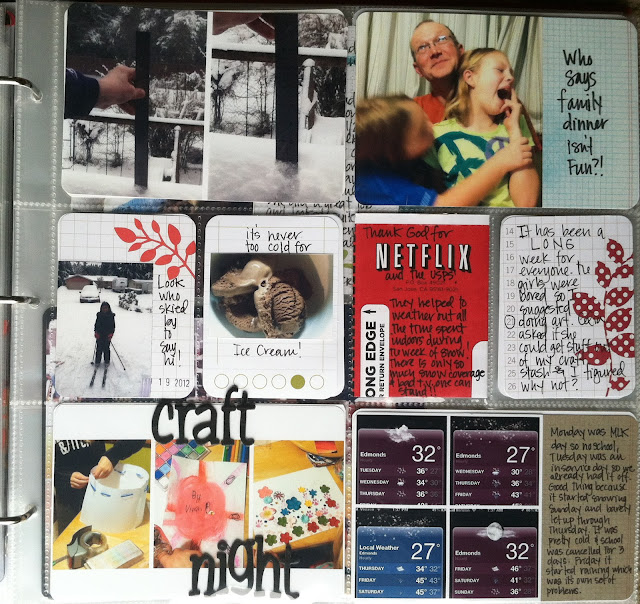 ok, ok, you midwesterners don't laugh at the amount of snow, that was just one day at different intervals. admittedly, we did only get about a foot total. i LOVE the picture of mr. fast-lane and #1 go-go-gadget girl, his expression is priceless. a friend and her parents stopped by on their x-country outing. ice cream, enough said! oh netflix how i love thee. between netflix and the postal service, we had new movies to watch all week! the go-go-gadget girls wanted to do crafts, so i let them have carte blanche in the craft room (still pretty proud of myself about that) the title (whose placement bugs the bejezus out of me, but those puppys stuck like nobody's business and i couldn't move them) is ancient thickers. a few day time highs from the week....i think the pic was a regular 2x2 layout from my printer option and not a diptic.

hello, thanks for stopping by. just a reminder, i'm a regular gal with regular pages; sometimes i wish i were as creative and clever as many of the others doing PL, but i've mostly come to terms with my regularness and i really like doing a PL album.  i forgot to mention that i run my weeks monday-sunday. i broke up the weekend the first year (2010) and figured out i wanted to remember the week as we lived it, starting with school/work on monday and ending with sunday night. this means that jan. 1 hasn't been memorialized yet since it was on a sunday. i plan on doing a little insert that i can pop in the front of the book later on. also, no title page, it'll come later as well. ok on with the show. 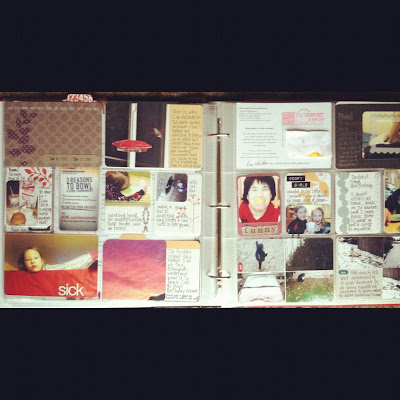 the full magilla. i run the week across the 2 pages - so on the top we have monday, tuesday, wednesday. the bottom is thursday, friday, saturday, sunday. 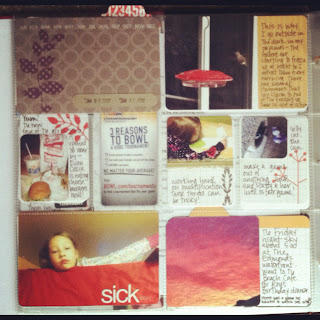 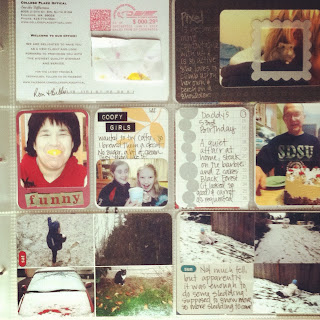 my car - ok, it's a mom car, a minivan - is in the shop for a checkup and i am driving mr. fastlane's car. i rarely drive it, not sure why, but when i do i have so much fun! no, it's nothing fancy or sporty, it a newer simple middle of the line honda civic, but....it's a manual. there is something about shifting that makes it seem faster and zippier. maybe i love it because it harkens back to my youth when i drove a stick, and it makes me feel young again - even with three go-go-gadget girls sitting in the back!
at Wednesday, January 25, 2012 No comments: Links to this post

yeah, not really. this will be my third year doing project life, and i'm still excited by it. amazing. it's fabulous that so many people have decided to join the revolution this year - i personally love to look at all the different pages and probably spend waaay to much time doing so! anyway,  i've found that this type of memory keeping is much more me than traditional scrapbook pages....i love the lifeness (is that a word?) of it and including stuff. it's almost like a laid out junk/smash journal (i just started a new one of those as well), and it really resonates with me. i am a regular gal with a regular family and a regular life, so my pages are pretty basic; not a lot of extras are added though i love all that, and secretly wish i had that flair - but that's ok because plain or fancy, it is still holds memories. right now i am using leftovers from the past 2 kits i've used (i have no idea which ones they are at this point) and some freebies i've gleaned from the interweb - God love all those talented people out there that can do what i can't! i would love to win a kit (turquoise please!) but i just may break down and buy stuff later on.
ok, enough.
with some trepidation, i give you: 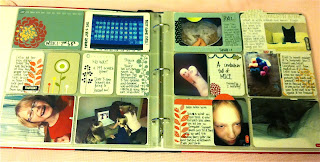 you'll have to forgive the quality of the pics, it's quite overcast today so not a lot of light, plus this was a kind of spur of the moment decision - and kind of do it now or loose your nerve - so i probably didn't choose the optimal place to take the pics....hopefully i'll get better! 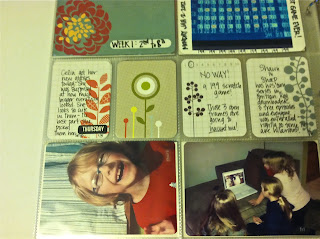 random journaling cards from the 2 old kits, and while i'm not in love with my handwriting (or even my writing skills) i like that i (mostly) journal by hand. my daughter's new glasses. watching 'shaun the sheep' - have you seen it? it's a spin off from the wallace and gromit movies. hilarious! 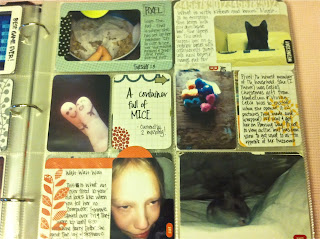 a new pet. a cute kitten. a silly picture of my fingers that makes me smile, and a very unhappy tween. oh i am not looking forward to the full on teen years. 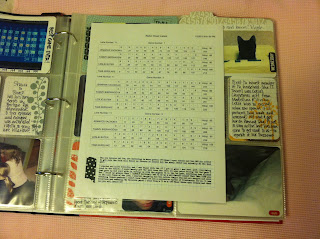 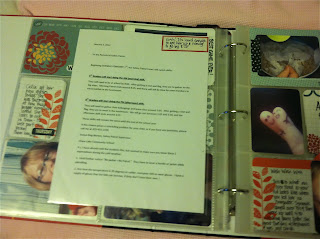 and the other side, a note from the safety patrol at school saying that my 5th grader will be switching to the morning shift starting february 1st. yuck.